Zoos Take Steps to Prevent Animals from Getting the Coronavirus

American zoos are taking steps to protect their animals from catching the new coronavirus from humans.

The steps include many of the same measures used to slow the spread of the virus in humans. These include social distancing and cleaning shared equipment.

Vaccines have also been used on animals. At the San Diego Zoo, a female orangutan became the first ape in the world to get a coronavirus vaccine in January.

The vaccine was given after a group of gorillas started showing signs of infection and later tested positive for the coronavirus.

The orangutan, named Karen, received two shots of a vaccine made by Zoetis, a New Jersey company that manufactures drugs for animals.

Nine other primates at the San Diego Zoo have been fully vaccinated: five bonobos and four orangutans. Four more animals — one bonobo and three gorillas — got their first shots this month and will get a second in April.

Nadine Lamberski is the wildlife health officer for the San Diego Zoo. She told the Associated Press that zoo officials acted quickly to vaccinate the animals in an effort protect other great apes.

The outbreak was linked to a zookeeper who was infected but had no signs of the virus. Seven gorillas got minor cases and recovered. But one older silverback gorilla developed the lung disease pneumonia, likely caused by the virus, as well as heart disease. He was put on medicines and received an antibody treatment to block the virus from infecting cells.

About 36 zoos in the United States and other countries have placed orders for the Zoetis vaccine. It is meant to work on particular animal species.

"We will jump at the opportunity to get the Zoetis vaccine for our own great apes," said Oakland Zoo official Alex Herman. She is ordering 100 injections.

Zoetis got permission from the U.S. Department of Agriculture to provide the vaccines on an experimental basis to the San Diego Zoo. The company will need to seek the same permission to provide the shots to additional zoos. 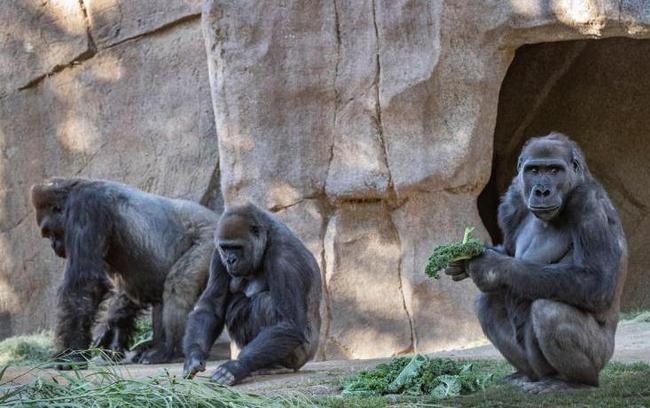 Scientists believe the new coronavirus likely started in bats before jumping to humans. Now many researchers worry that humans may unknowingly infect other animal species.

Animal health experts say great apes such as gorillas are especially at risk of becoming infected. These animals share 98 percent of their DNA with humans. So far, confirmed coronavirus cases include gorillas, tigers and lions at zoos; domestic cats and dogs; farmed mink, and at least one wild mink in Utah.

Scientists have also experimentally shown that ferrets, racoon dogs and white-tailed deer are at risk, although pigs and cows are not.

Another concern is that virus spread among other species could produce new versions, or variants.

In Denmark, workers at a mink farm unknowingly infected the animals. As the coronavirus spread among the mink, it mutated and humans became infected with the new variant. In an effort to control the situation, the government ordered millions of mink to be killed.

Scott Weese is a microbiologist at Ontario Veterinary College in Canada. He told the AP that "mutations happen when there's a lot of disease transfer going on between animals."

Since the outbreak, the San Diego Zoo has been using a lot of fans at its indoor primate areas to improve air flow. Zoo workers also wear face coverings and limit their time spent inside with the animals.