Hello, I'm Justine Greene with the BBC News. The government of Mozambique says Islamist militants who began attacking the town of Palma on Wednesday have killed dozens of people. Thousands have fled the assault in the northern province of Cabo Delgado. A Defense Department spokesman Omar Saranga denied the military response had been slow. Here's our Africa correspondent Catherine Byaruhanga. After days of silence that's left many Mozambicans anxious, state security forces shed some light on the events unfolding in Palma. Mr. Omar Saranga said at least seven people were killed when their convoy came under fire as they tried to escape from the town. The family of a South African man Adrian Nell confirmed he died in the ambush. There has been criticism of the army's response to the attack in Palma. Survivors' talk of having to fend for themselves as they sought safety.

New figures show the number of deaths linked to COVID-19 in Mexico is 60% higher than previously thought. 320,000 Mexicans are thought to have died with the disease. Our correspondent Will Grant reports. Having failed to produce excess death data for some time, a government report concluded that a little under 300,000 people died from the virus since the pandemic began until mid-February. Combined with those who have since died from the illness, Mexico would be placed above Brazil and only behind the United States in the global list of COVID related deaths, despite having a far smaller population than both countries. In part, the difficulty of obtaining a completely clear picture of the problem in Mexico comes from its low rate of testing. It is also believed that given the shortage of ICU beds in many states, a large number of people have died at home. 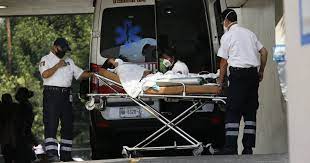 Mexico and Guatemala have announced a joint operation to deploy hundreds of troops and police along their border to prevent migrants from traveling North towards the United States. The authorities say that they are particularly concerned about the growing number of children and teenagers traveling without their parents in migrant caravans.

The German Chancellor Angela Merkel has urged the country's regional leaders to abide by a deal to impose tougher coronavirus restrictions as a third wave of infections gathers pace. Damien McGuinness reports. Germany's regional governments had agreed to an emergency break, meaning more lockdown restrictions if infection rates rise over a certain level.In much of Germany that rise has now happened, but some regional leaders are still not using that emergency break.That's an infringement of the agreement, Mrs. Merkel said. The Chancellor also criticized pilot schemes in some parts of the country aimed at opening everything up by requiring people to have a negative test on the day.BBC News.